The best known of these projects is usually referred to as the Schriever-Habermohl project . Rudolf Schriever was an engineer and test pilot. This project was centered in Prag, at the Prag-Gbell airport . 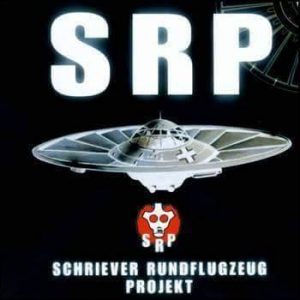 Actual construction work began somewhere between 1941 and 1943 .This was originally a Luftwaffe project which received technical assistance from the Skoda Works at Prag and at a Skoda division at Letov and perhaps elsewhere . Other firms participating in the project according to Epp were the Junkers firm at Oscheben and Bemburg, the Wilhelm Gustloff firm at Weimarand the Kieler Leichtbau at Neubrandenburg . This project started as a project of the Luftwaffe, sponsored by second-in-command, Ernst Udet. It then fell under the control of Speer’s Armament Ministry at which time it was administered by engineer Georg Klein. Finally, probably sometime in 1944, this project came under the control of the SS, specifically under the purview of General Hans Kammler 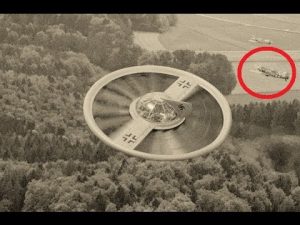 According to his own words, Georg Klein saw this device fly on February 14, 1945 This may have been the first official flight, but it was not the first flight made by this device. According to one witness, a saucer flight occurred as early as August or September of 1943 at this facility. 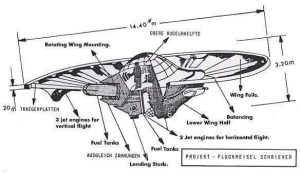 The eyewitness was in flight-training at the Prag-Gbell facility when he saw a short test flight of such a device. He states that the saucer was 5 to6 meters in diameter (about 15 to 18 feet in diameter) and about as tall as a man, with an outer border of 30-40 centimeters.

It was “aluminum” in color and rested on four thin, long legs. The flight distance observed was about 300 meters at low level of one meter in altitude. The witness was 200 meters from the event and one of many students there at the time . Joseph Andreas Epp, an engineer who served as a consultant to both the Schriever-Habermohl and the Miethe-Belluzzo projects, states that fifteen prototypes were built in all . The final device associated with Schriever-Habermohl is described by engineer Rudolf Lusar who worked in the German Patent Office, as a central cockpit surrounded by rotating adjustable wing-vanes forming a circle.

The vanes were held together by a band at the outer edge of the wheel-like device. The pitch of the vanes could be adjusted so that during take off more lift was generated by increasing their angle from a more horizontal setting. In level flight the angle would be adjusted to a smaller angle.

This is similar to the way helicopter rotors operate. The wing-vanes were to be set in rotation by small rockets placed around the rim like a pinwheel. Once rotational speed was sufficient,lift-off was achieved. After the craft had risen to some height the horizontal jets or rockets were ignited and the small rockets shut off. After this the wing-blades would be allowed to rotate freely as the saucer moved forward as in an auto-gyrocopter. In all probability, the wing-blades speed, and so their lifting value, could also be increased by directing the adjustable horizontal jets slightly upwards to engage the blades,thus spinning them faster at the digression of the pilot 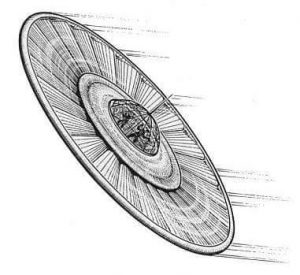 Rapid horizontal flight was possible with these jet or rocket engines. Probable candidates were the Junkers Jumo 004 jet engines such as were used on the famous German jet fighter, the Messerschmitt 262. A possible substitute would have been the somewhat less powerful BMW 003 engines. The rocket engine would have been the Walter HWK109 which powered the Messerschmitt 163 rocket interceptor. If all had been plentiful, the Junkers Jumo 004 probably would have been the first choice. Epp reports Jumo 211/b engines were used . Klaas reports the Argus pulse jet (Schmidt-duct), used on the V-l, was also considered (16).All of these types of engines were difficult to obtain at the time because they were needed for high priority fighters and bombers, the V-l and the rocket interceptor aircraft.

Joseph Andreas Epp reports in his book Die Realitaet der Flugscheiben (The Reality of the Flying Discs) that an official test flight occurred in February of 1945. Epp managed to take two still pictures of the saucer in flight which appear in his book and are reproduced here. There is some confusion about the date of these pictures. In the video film “U̳F̳O̳s S̳e̳c̳r̳e̳t̳s of the3rd Reich”, Epp states these pictures were taken in the Fall of1944. In his book the date is given as the official date of February 14, 1945. In personal correspondence to me of December, 30, 1991, he indicated the date of the pictures as August, 1944. In that correspondence he further revealed that the official flight had been February 14, 1945 but an earlier lift-off had taken place in August of 1944. The pictures show a small disc-like object in the distance at some altitude posed above a landscape. The saucer is at too great a distance and altitude to show any mechanical detail. As Klaus-Peter Rothkugel points out,the foliage on the trees indicates the August date as being the most accurate. Very high performance flight characteristics are attributed to this design. Georg Klein says it climbed to 12,400 meters (over37,000 feet) in three minutes (17) and attaining a speed around that of the sound barrier . Epp says that it achieved a speed of Mach 1 (about 1200 kilometers per hour or about 750miles per hour) . From his discussion, it appears that Epp is describing the unofficial lift-off in August, 1944 at this point. He goes on to say that on the next night, the sound barrier was broken in manned flight but that the pilot was frightened by the vibrations encountered at that time . On the official test flight, Epp reports a top speed of 2200 kilometers per hour . Lusar reports a top speed of 2000kilometers per hour . Many other writers cite the same or similar top speed. There is no doubt of two facts. The first is that these are supersonic speeds which are being discussed.Second, it is a manned flight which is under discussion.

But at least one writer has discounted such high performance). It is argued that the large frontal area of one of the possible designs in question makes Mach 2 flight impossible. The argument seems to be that given the possible power plants the atmospheric resistance caused by this frontal area would slow the craft to a point below the figures stated earlier. Some new information has come to light regarding the propulsion system which supports the original assessment. Although actual construction had not started, wind-tunnel and design studies confirmed the feasibility of building a research aircraft which was designated Project 8-346. This aircraft was not a saucer but a modern looking swept-back wing design. According this post-war Allied intelligence report, the Germans designed the 8-346 to flying the range of 2000 kilometers per hour to Mach 2. .Interestingly enough, it was to use two Walther HWK109 rocket engines. This is one of the engine configurations under consideration for the Schriever-Habermohl saucer project. As an aside, it should be noted that there are those who will resist at any attempt to impugn the official breaking of the sound barrier by Chuck Yeager in 1947 in the Bell X-l rocket aircraft. They had better brace themselves. This record has also been challenged from another direction. This challenge was reported in February, 2001, by the Associated Press, Berlin. It seems that a certain Hans Guido Mutke claims he pushed his Messerschmitt jet fighter, the Me-262, through the sound barrier in 1945. This occurred during an emergency dive to help another German flyer during air combat. At that time he experienced vibrations and shaking of the aircraft. According to the report,a Hamburg Professor is working on a computer simulation in order to check the validity of this claim. Returning to the topic at hand, Schriever continued to work Anthe project until April 15, 1945. About this time Prag was threatened by the Soviet Army. The Czech technicians working on this project were reported to have gone amuck, looting the facility as the Russians approached. The saucer prototype(s) at Prag-Gbell were pushed out onto the tarmac and burnt. Habermohl disappeared and presumably ended up in the hands of the Soviets. Schriever, according to his own statements, packed the saucer plans in the trunk of his BMW and with his family drove into Southern Germany. After cessation of hostilities Schriever worked his way north to his parents house in Bremerhaven-Lehe.There Schriever set up an inventor-workshop. On August 4, 1948there was a break in to the workshop in which Schriever’s plans and saucer model were stolen . Schriever was approached by agents of “foreign powers” concerning his knowledge of German saucers. He declined their offers, preferring rather menial work driving a truck for the U.S. Army.