A group of scientists analyzed Mayan teeth found at different times during archaeological excavations and discovered an unexpectedly high level of ancient dentistry.

The ancient Maya were definitely very proud of their teeth. Long before Europeans filled their mouths with gold, people in Mesoamerica flashed smiles adorned with jade, turquoise, gold, jet, or hematite gemstones.

Moreover, Maya dentistry was available to both rich and poor, men and women. In general, it seems that a great many people started visiting the dentist at a young age to decorate their teeth with precious stones and minerals.

Archaeologists speculate that perhaps the Maya’s jeweled teeth had a spiritual as well as aesthetic purpose.

Recently, a team of scientists from universities in the US and Mexico decided to take a closer look at how Mayan dentists attached stones to their teeth. The study was published in the Journal of Archaeological Science.

First, the researchers found that the cements were incredibly strong, holding the stones in place even after more than a thousand years. Secondly, they had a complex composition, including substances that helped fight tooth decay, reduce inflammation and infections in the mouth.

And the drilling of holes in the teeth was done so skillfully that it did not affect the pulp of the nerves and blood vessels.

The teeth taken for study came from three Mayan archaeological sites in Guatemala, Belize and Honduras, and the people to whom they belonged were the most ordinary people, not from the elite.

Most dental cements have shown the presence of compounds associated with pine tar, which are thought to contain antibacterial properties. 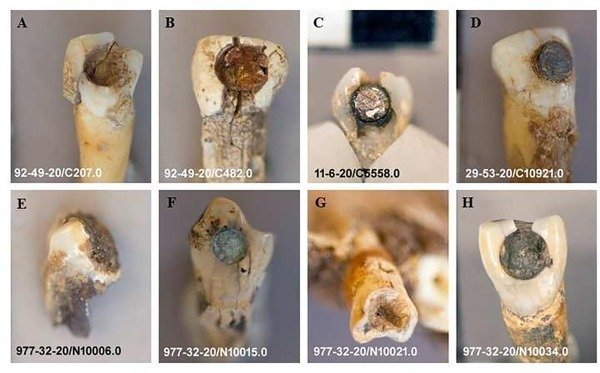 Two of the eight teeth contained remnants of sclareolide, a plant compound with antibacterial and antifungal properties. It is also often used in the perfume industry as it smells quite nice.

Essential oils from plants in the mint family have also been common in formulations, suggesting potential anti-inflammatory effects.

In general, archaeologists have known before that the Maya were very sensitive to the health of their teeth. They regularly cleaned and polished their teeth, and the teeth that began to rot were removed in time.

Also known (which does not make it less surprising) is the fact that in the jaws of the Mayan ruler Janaab Pakal, who died in 683 AD. at the age of 80, almost all of his teeth were preserved and they were in very good condition.