Celebrities often use their platforms to spread awareness on important issues. But while many of us have become numb to their warnings, there’s something about Harrison Ford that makes people sit up and listen. 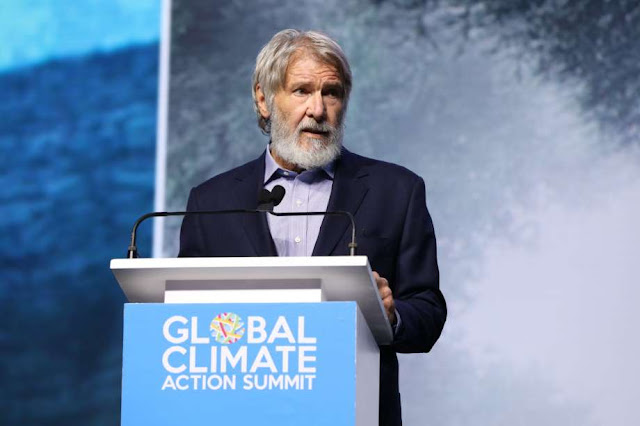 More likely, though, it’s because Ford doesn’t tiptoe around important issues, he charges through them with guns blazing.

Speaking at the Global Climate Action Summit in San Francisco this week, the 76-year-old actor and tireless climate activist issued a sober warning: “If we don’t change the path that we are on today, the future of humanity is at stake”.

The actor’s stern statement is followed by a long sigh. And with that one heavy breath, you can almost feel the actor’s exasperation. For nearly 27 years, Ford has been working for the environmental group Conservation International, which supports scientists from around the world who are working to identify and overcome biodiversity threats.

But as Ford makes clear in his recent and impassioned speech, none of that work matters if we deny the reality of climate change and collectively forget nature in our “corporate, state and national climate goals”.

“We can put solar panels on every house, we can turn every car into an electric vehicle, as long as Sumatra burns, we will have failed,” he says. “So long as the Amazon’s great forests are slashed and burned, so long as the protected lands of tribal people, Indigenous people, are allowed to be encroached upon, so long as wetlands and bog peats are destroyed, our climate goals will remain out of reach. And we will be shit out of time”.
To say that the actor appears displeased with the current state of environmental affairs would be a drastic understatement. Ford’s speech is not simply an urgent call-to-action, it is a rallying cry; a thinly veiled attack against ignorant politicians ahead of the US midterm elections.

“Elect leaders who believe in science,” he urges voters.

The comments are reminiscent of a similar speech made by Ford that went viral last year, just after President Trump pulled the US out of the Paris Climate Accord.

“We’ve got people in charge of important shit who don’t believe in science,” he warned us at the time.You can still sense that passion one year later. But after a slew of political attacks against climate science in 2018, you can also hear a rumbling of anger.

Calling climate change “the greatest moral crisis of our time”, Ford cautions that unless something changes (and soon), those “least responsible will bear the greatest costs”.

Throughout it all, he brings us back to his core argument: that natural carbon sinks are currently “the only feasible solution” for fighting climate change.”Simply put, if we can’t protect nature, we can’t protect ourselves,” he says.

The end of his speech could not have been written by anybody else: “Let’s shut off our phones, roll up our sleeves and kick this monster’s ass”.