Humans are inquisitive about exploring the deep mysteries of the universe. This curiosity will demand the development of extra-terrestrial settlements, which includes building temporary structures and observatories for space organizations around the world. 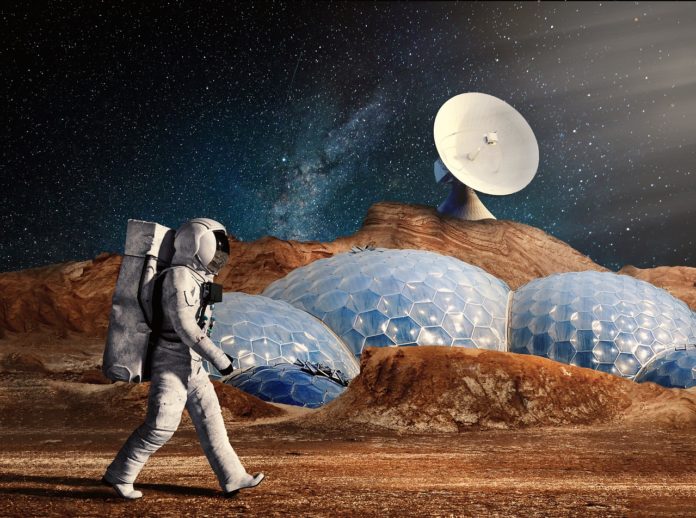 Mars and the moon have been preferred for such settlements as both are very close to the Earth and have been identified as unprecedented sources of processable materials, such as an abundance of fine soil on their surfaces, termed regolith.

For feasible and sustainable space exploration, temporary structures and observatories need to be built from available in situ resources on the moon/Mars. In situ resource utilization (ISRU) refers to any process that encourages the processing of local resources found during the exploration of extra-terrestrial habitats to reduce dependency on materials chaperoned from Earth.

Given the importance and burgeoning interest in extra-terrestrial human settlements, it is necessary that various other methods of creating structures from lunar/martian regolith be probed, which are feasible, economical, and practicable in nature.

In a recent study in collaboration with the Indian Space Research Organization (ISRO), a team of researchers from the Indian Institute of Science (IISc) has developed a sustainable method for making bricks out of Martian soil using bacteria and urea. These “space bricks” can be used to construct building-like structures on Mars that could facilitate human settlement on the red planet. The method for making these space bricks has been outlined in a study published in PLOS One.

“The primary challenge in this endeavor lies in the consolidation of the unbonded fine regolith particles into a structure of substantial mechanical integrity. With this intent, we discuss here a casting method for fabrication of brick-like structures using regolith simulants and a biomineralization process called microbial induced calcite precipitation (MICP).” Study quotes.

A slurry is first created by mixing Martian soil (simulant) with guar gum, a bacterium called Sporosarcina pasteurii, urea, and nickel chloride (NiCl2). This slurry can be poured into moulds of any desired shape, and over a few days the bacteria convert the urea into crystals of calcium carbonate. These crystals, along with biopolymers secreted by the microbes, act as the cement holding the soil particles together.

An advantage of this method is the reduced porosity of the bricks, which has been a problem with other methods used to consolidate Martian soil into bricks. “The bacteria seep deep into the pore spaces, using their proteins to bind the particles together, decreasing porosity and leading to stronger bricks,” says Aloke Kumar, Associate Professor in the Department of Mechanical Engineering at IISc, one of the senior authors of the paper.

“Our study shows a significant increase in the compressive strength of the resulting consolidated brick-like structures with both martian and lunar regolith simulants.” Study quotes.

The study has also presented a casting method, which can be ideal for making various shape structures as well as bricks with consistent strength. A natural polymer (guar gum) as an additive and appropriate concentration of NiCl2 tends to accelerate the overall MICP process, thus contributing to enhancing the strength of the space bricks.

The research group had previously worked on making bricks out of lunar soil (simulant) using a similar method. However, the previous method could only produce cylindrical bricks, while the current slurry-casting method can also produce bricks of complex shapes.

The slurry-casting method was developed with the help of Koushik Viswanathan, Assistant Professor in the Department of Mechanical Engineering, IISc, whose lab works on advanced manufacturing processes. In addition, extending the method to Martian soil proved challenging.

“Martian soil contains a lot of iron, which causes toxicity to organisms. In the beginning, our bacteria did not grow at all. Adding nickel chloride was the key step in making the soil hospitable to the bacteria,” explains Kumar.

The group plans to investigate the effect of Mars’ atmosphere and low gravity on the strength of the space bricks. The Martian atmosphere is 100 times thinner than Earth’s atmosphere and contains over 95% carbon dioxide, which may significantly affect bacterial growth. The researchers have constructed a device called MARS (Martian AtmospheRe Simulator), which consists of a chamber that reproduces the atmospheric conditions found on Mars in the lab.

The team has also developed a lab-on-a-chip device that aims to measure bacterial activity in micro-gravity conditions. “The device is being developed keeping in mind our intention to perform experiments in micro-gravity conditions in the near future,” explains Rashmi Dikshit, a DBT-BioCARe Fellow at IISc and first author of the study, who had also previously worked on the lunar bricks. With ISRO’s help, the team plans to send such devices into space, so that they can study the effect of low gravity on the bacterial growth.

“I’m so excited that many researchers across the world are thinking about colonising other planets,” says Kumar. “It may not happen quickly, but people are actively working on it.”

A biological approach mentioned in the study, coupled with a scalable casting method, towards manufacturing bricks presents a promising and highly sustainable potential route for in situ utilization of structural elements on extra-terrestrial habitats.