Last year in July 2016, Kepler spacecraft‘s prolonged mission called K2 has detected an alien world as a planetary candidate during the spacecraft’s Campaign. It then obtained the light curve of the host star EPIC 228735255, that has same mass and size of the sun. 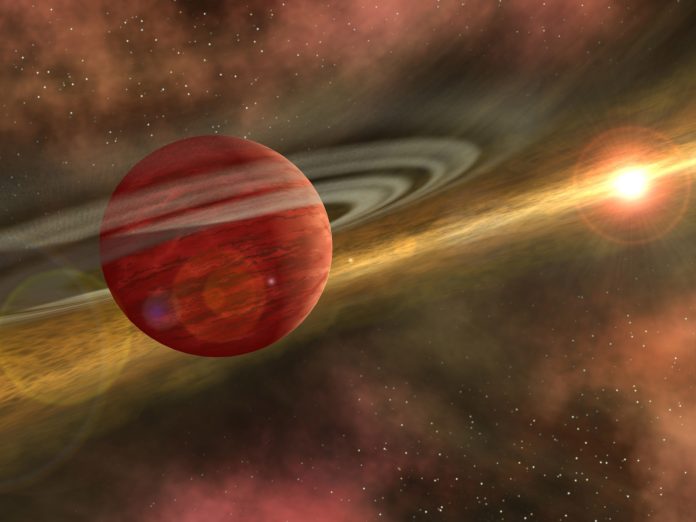 Now, an international team of astronomers led by Helen Giles of the Geneva Observatory in Switzerland has identified a new extrasolar planet from the data provided by K2. Scientists named this exoplanet as EPIC 228735255b, a so-called ‘hot Jupiter’ on an eccentric orbit around its parent star.

In order to confirm the planetary status of the ‘Hot Jupiter’, scientists have accomplished some observations using ground-based telescopes. In particular, they used the CORALIE spectrograph on the 1.2-m Euler Telescope and the High Accuracy Radial Velocity Planet Searcher (HARPS) on the ESO 3.6-m telescope.

They then conducted radial velocity measurements of EPIC 228735255. Additional photometric data was provided by three Las Cumbres Observatory (LCO) 1-m telescopes located in South Africa and high angular resolution imaging of the star was obtained by the Robo-AO instrument mounted on the Kitt Peak 2.1-m telescope in Arizona.

The observation confirmed the scientists that the object spotted by K2 is a planet. Scientists found that EPIC 228735255b is as massive as Jupiter and has a radius of about 1.09 Jupiter radii. It has a bulk density approximately 27 percent lower than that of Jupiter. Meanwhile, the planet is slightly inflated.

Scientists noted, “We found a ‘hot Jupiter’ planet in data from K2 Campaign 10 and followed it up with radial velocity measurements and high angular resolution imaging.”

Scientists also found that EPIC 228735255b has a non-circular orbit with an eccentricity of 0.12 and circles its parent star every 6.57 days. Thus, scientists predict that the planet might have an equilibrium temperature of 1,114 K.

All of its parameters suggests that this exoplanet is the next example of a ‘hot Jupiter’ exoplanet, with similar characteristics to the solar system’s biggest planet. It also has a longer period than 94 percent of giant planets.