A strange 50-kilometer-long cylindrical spacecraft reaches the Solar System in Arthur C Clarke’s award-winning 1973 novel Rendezvous With Rama. Before it goes back out into interstellar space and is swallowed up by the darkness, a space expedition is launched to intercept it and investigate it.

Surprisingly, science fiction is now becoming a science fact. ‘Oumuamua,’ a strange interstellar object that sped through the Solar System in 2017, may have been an alien Rama-like artefact, according to Harvard University astronomer Prof Avi Loeb.

But being a scientist rather than a science fiction writer, he wants data. “With that in mind, I have set up Project Galileo,” he says. “Its aim is to scan the heavens for the next ‘Oumuamua’ and send a space mission to fly by it and photograph it.”

Galileo involves more than 100 scientists, led by Loeb. They are subtly altering the focus of the Search for Extraterrestrial Intelligence (SETI) from looking for traces of alien biology or electromagnetic signals to hunting for signs of extraterrestrial technology in the form of items. This reform, according to Loeb, has been long overdue.

This shift in SETI’s concentration does not sit well with everyone. Prof Jason Wright, an astronomer and astrophysicist at Pennsylvania State University, adds, “However, I would agree that so-called artefact SETI seems to have gained greater popularity recently.” However, he points out that “very little searching is being done.”

According to Loeb, the ideal area to seek for artefacts is in our Solar System, which has served as a’mailbox’ for extraterrestrial ‘packages’ for 4.55 billion years.

Alien artefacts in our Solar System 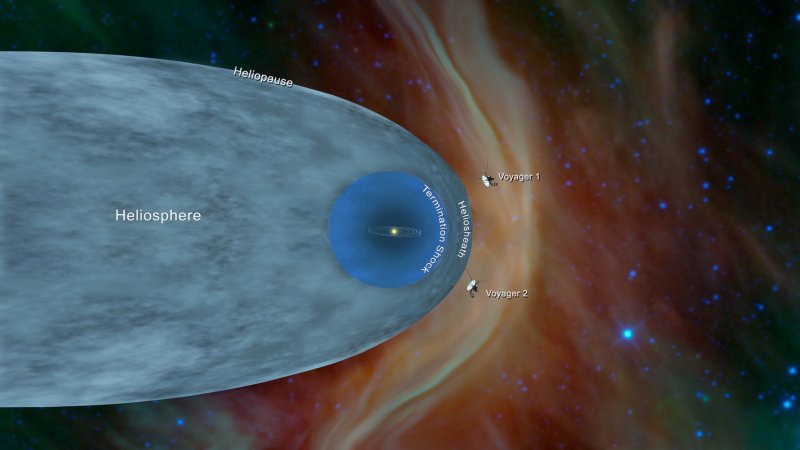 By purpose or by chance, alien technology could end up in our backyard. Dr. Alexey Arkhipov of the Institute of Radio Astronomy in Kharkiv, Ukraine, pointed out in 1996 that events such as collisions in space and explosions inevitably eject bits of our own space technology from the Solar System, and that the same thing should happen in reverse, with alien spacefaring civilisations’ stuff ending up in our Solar System.

Arkhipov calculated that the Earth would have accumulated about 4,000 extraterrestrial artefacts the size of a Marmite jar over its history by assuming that 1% of nearby stars have been home to technological civilisations and that they convert 1% of the material of their asteroids into the extraterrestrial equivalent of consumer goods over their history.

Because the Earth’s surface is constantly reshaped by weather and geological action, any alien objects would be extremely difficult to locate.

However, other bodies in the Solar System with stable surfaces, such as the Moon, would be a better bet. “The Moon is like a museum,” says Loeb. “We should scour its surface for equipment we did not send.”

It may be difficult to recognise an alien technological object. Alien civilisations could be as evolutionary far from us as ants are from us. Bacteria, for example.

However, Loeb claims that if a caveman picked up a cellphone, he would recognise it as something else than a rock – albeit the purpose would remain a mystery.

‘Similarly, we should look for things that differ from rocks,” says Loeb. And he does not mean only on the surface of bodies in the Solar System, he means the space between the planets too. 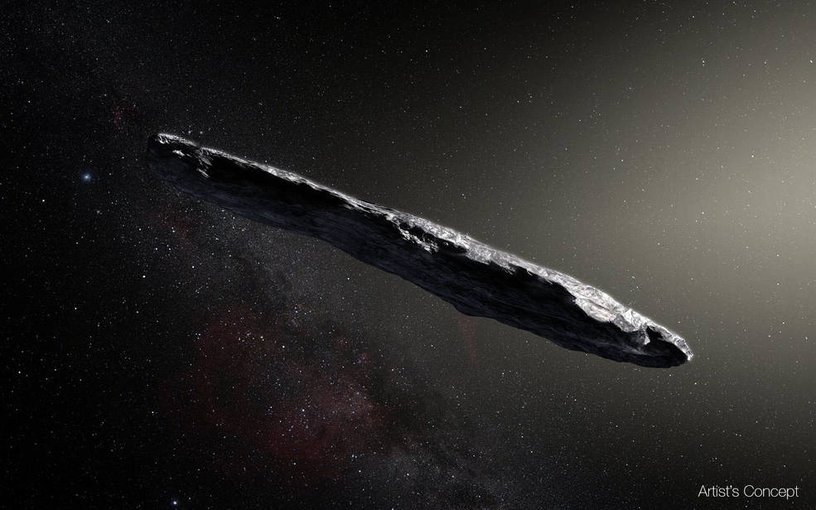 ‘Oumuamua was discovered by the Pan-STARRS telescope in 2017. It was the first known interstellar object to visit our Solar System

The Panoramic Survey Telescope and Rapid Response System (Pan-STARRS) at Haleakala Observatory in Hawaii saw ‘Oumuamua there in late 2017.

It was shortly determined that it was moving too quickly to be a body caught in the Sun’s gravity. ‘Oumuamua reflected a wide range of light, indicating that it had an unusual shape, most likely that of a flat pancake the size of a football field.

The most noticeable feature of ‘Oumuamua was that it didn’t move like a body impacted exclusively by the gravity of the Sun. It was being pushed away from the Sun by something.

Comets emit material that behaves like rocket fuel, propelling them in the opposite direction. ‘Oumuamua, on the other hand, showed no evidence of debris being expelled, according to Loeb.

Others, on the other hand, believe it is difficult to exclude this possibility. “The amount of outgassing required to explain the acceleration would have been too small to be detected,” says University of Oxford astronomer Prof Chris Lintott. He also points out that various observations have previously been alleged to be proof of aliens before being proven to be natural.

Because of their low density, the Martian moons Phobos and Deimos were supposed to be hollow, and pulsars were dubbed LGMs, or Little Green Men.

The existence of one object from beyond the Solar System, such as ‘Oumuamua, implies that there should be others.

2020 SO was found by Pan-STARRS in September 2020. It was being driven away from the Sun, much like ‘Oumuamua, with no visible cometary outgassing. When astronomers traced its orbit back in time, they discovered that the intelligent civilisation from which it originated was none other than… ours! The destroyed Centaur upper stage of the rocket that launched NASA’s Surveyor 2 lander to the Moon in 1966 seems to be 2020 SO.

Loeb’s claim that ‘Oumuamua was an alien artefact was controversial, to say the least. Loeb thought it strange that astronomers were willing to propose bizarre things like a hydrogen iceberg, a chip of frozen nitrogen, or a cloud of dust particles 100 times rarer than air, yet were offended by the proposal that ‘Oumuamua came from an ET civilisation.

“One astronomer even said ‘‘Oumuamua is so weird. I wish it hadn’t existed,’’ says Loeb. Meanwhile, Loeb was wondering, “Who built ‘Oumuamua? Could it be a piece of garbage? Might it be merely the skin of a larger vehicle that broke up?”

It’s more difficult to look outside the Solar System. However, Loeb believes that seeking for techno signatures is still a better bet than looking for microbial biosignatures, which is astrobiologist’s main goal. The primary biomarkers are oxygen and methane, which can only exist in a planetary atmosphere if they are replaced on a regular basis.

There are currently about 4,000 planets recognised beyond our Solar System. Some pass between the star and Earth as they orbit their parent stars, allowing starlight to flow through their atmospheres.

The ‘Spectral fingerprints’ of oxygen and methane are the wavelengths at which they take bites out of the starlight.“The problem,” says Loeb, “is that for the first two billion years of life on Earth there was little oxygen in the atmosphere. And both oxygen and methane can have non-living sources.”

Instead of looking for biological molecules, Loeb feels that looking for technological compounds is a better option. He suggests substances like chlorofluorocarbons, or CFCs, which were previously utilised as refrigerants and spray-can propellants on Earth but are now known for their ozone-depleting qualities.“They could be detected in the atmosphere of planets around nearby stars by NASA’s 6.5-metre James Webb Space Telescope,” he says.

Other evidence, such as alien megastructures, are also present. It appeared for a moment that KIC 8462852, also known as Tabby’s Star, was swinging wildly in brightness, and that it was being orbited by such objects, probably huge starlight collectors. However, the star’s behaviour was revealed to be due to dust in the Solar System.

Light sails propelled by mega-lasers, according to Loeb, are a realistic mode of interplanetary transport, and the overspill of such light may be detected.

Furthermore, if an alien civilisation captured starlight by covering its planet with photovoltaic panels, its surface would reflect light differently than rock and ocean.

Proxima Centauri, the nearest star, is fortunate enough to have a planet. Proxima Centauri b, the planet, is 20 times closer to its star than the Earth is to the Sun.

The planet is potentially habitable because Proxima Centauri is a cold, red dwarf star 500 times less bright than the Sun. The planet, like our Moon, is tidally locked, with one side permanently day and the other permanently night.

“An alien civilization might live on the night side but cover the light side with photovoltaic panels,” says Loeb. About 0.1 per cent of the Earth’s surface is illuminated with artificial lights, but Loeb estimates that if 10 percent of Proxima Centauri b’s night side is similarly illuminated, this would be detectable from Earth by the James Webb Space Telescope, which was launched on Christmas Day.

Loeb acknowledges that extraterrestrials may be tough to track down. They could be hidden because the Universe is perilous, and if you broadcast your presence, you’ll be wiped away. If that’s the case, it’s probably too late for us, as our radio transmissions have already reached tens of thousands of neighbouring stars!

Even if ETs aren’t hiding, they may have chosen to stay at home and dwell in a virtual cocoon, similar to Facebook’s envisioned Metaverse. Another scenario predicted by Clarke in his 1949 novella The Lion Of Comarre, which depicted a future in which many people prefer the virtual world to reality.

Of course, aliens millions or even billions of years ahead of us in evolutionary terms are likely to be “indistinguishable from magic,” as Clarke put it.

“A sufficiently advanced intelligence might even be a good approximation of God,” says Loeb. “It would be able to create life from non-life and maybe even manipulate laws of physics to make new universes.”

What are the advantages of discovering advanced extraterrestrial artefacts? We would know that planetary cataclysms, such as global warming, are conceivable to endure. Hopefully, we will be motivated to continue pushing the boundaries of scientific knowledge.

Most significantly, knowing about the existence of an alien civilization, according to Loeb, would make differences between people on Earth appear insignificant.

“In the 20th Century, denial of this caused the deaths of 3 per cent of the world’s population at the hands of the Nazis and others,” says Loeb. “ETs would show us more unites us than divides us.”

As for the chance of finding an ET artefact, Wright confesses: “I don’t know!” Loeb, however, is more optimistic. “Most stars formed billions of years before the Sun,” he says. “For that reason, I think the chances are very good.”