Giant coils of lava on Mars suggest a mysterious network of valleys on the planet was born from volcanoes, researchers say. The origin of the Athabasca Valles region near the equator of Mars has been debated for more than a decade. Some researchers have proposed that lava once shaped the valleys, while others have thought ice was responsible.

Andy Ryan, a planetary geologist at Arizona State University, didn’t notice these enigmatic coils on the Martian surface at first. It wasn’t until he took a second, closer look at images of the Red Planet that the odd spirals came into focus. Ryan was looking into an area called the Athabasca Valles, a large (about 100,000 square miles), canyon-like valley near Mars’ equator. At the head of the valley is a series of cracks called the Cerberus Fossae, and at the base the valley opens into a huge, flat area.

The way the ground there is patterned with multisided polygons suggests that either fire or ice could be the culprit – such patterns of cracks might have formed due to seasonal fluctuations in temperature if the surface there was rich in ice, but also might have arose as lava cooled and fractured.

The direction of the coil can tell planetary geologists how the lava was moving as it flowed, and reveals that the surface of the vast area is coated with lava. More than 5000 cubic kilometers worth of lava pooled in the Cerberus Palus on Mars, forming a giant lava lake.

Ryan spotted these coils with the HiRISE (High Resolution Imaging Science Experiment) instrument, a camera on board the Mars Reconnaissance Orbiter that takes detailed images of Mars’ surface, and which planetary geologists use to study the planet’s history and composition. Ryan performed his analysis using more than 100 high resolution images beamed back by the NASA’s Mars Reconnaissance Orbiter.

Ryan said the large spiral coils there, in the Elysium volcanic province of Mars, range from five to 30 meters (16 to 100 feet) wide and could not have been formed by ice- or water-related processes.Now high-resolution images beamed back by NASA’s Mars Reconnaissance Orbiter of the Red Planet have revealed 269 spirals of lava that researchers say cannot be explained by ice-related activity. “This is the first time lava coils have been identified on an extraterrestrial setting,” study lead author Andrew Ryan at Arizona State University told SPACE.com. “The most surprising thing about these features when I first saw them was how well-preserved they are.” 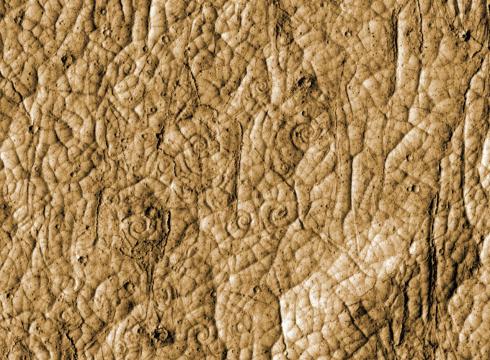 Ryan spotted all these coils, ranging from 16 to 98 feet wide (5 to 30 meters), by eye. “You can’t see them unless you zoom in really close, and even then they’re really subtle — it’s pretty dusty there, so the images are just a pale gray color, and they don’t really jump out until you boost the contrast, so it’s not surprising at all to me that they’ve been overlooked before,” Ryan said.

And if Ryan is right that it was lava, not ice, that left these graceful spirals drawn on the surface of Mars, other questions remain. For one thing, scientists still aren’t sure how the Athabasca Valles itself formed.
Their excellent preservation, along with the lack of craters in the cooled lava, suggests the volcanic eruption didn’t take place all that long ago.

Cooling lava on Mars can form patterns like snail shells when the lava is pulled in two directions at once. Such patterns, rare on Earth, have never before been seen on Mars.

The lava left behind telltale coils as seen on some parts of Earth, like on the Big Island of Hawaii and in submarine lava flows near the Galapagos Rift on the floor of the Pacific Ocean, said the findings in the journal Science. They usually form along slow-moving shear zones in a flow; for example, along the margins of a small channel, and the direction of the flow can be determined from a lava coil.

Mars is the home of the largest known volcano in the solar system, Olympus Mons, which towers over Mars’ western hemisphere. At 16 miles (25 km) high, it is about three times as tall as Mount Everest, Earth’s highest mountain.

But don’t start a Martian volcano watch just yet. It will probably be millions of years before the Red Planet has another eruption.